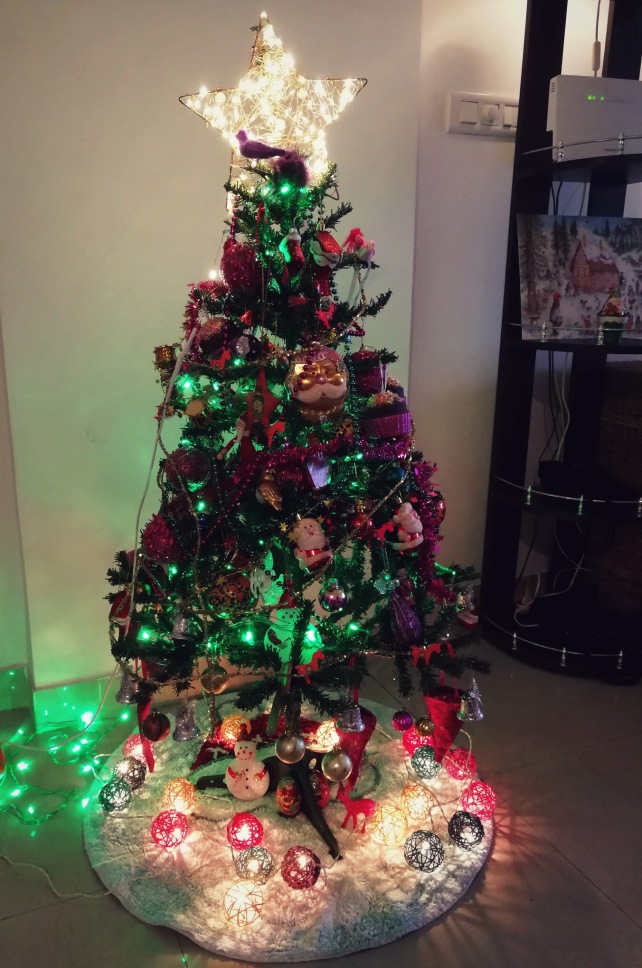 My tree this year decorated with ornaments collected through the years. 🎅🏼❤️🤶🏻❤️🎄 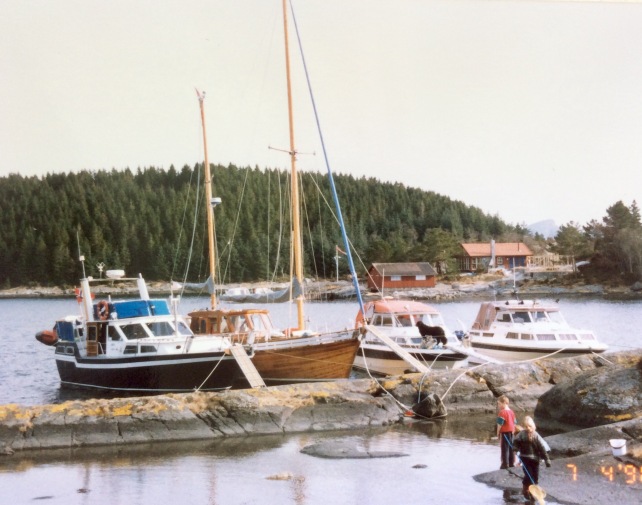 I always tell people I grew up on the sea. This is only partially true; I grew up by the seaside on a hill, eating breakfast every morning to the sight and sound of the roaring ocean outside the broad red-curtained window. But I became a true sailor at age six when my parents decided to build a 35 feet long wooden sailing boat on a raft on the South-side of the country. My uncle, who was already an experienced sailor, agreed to pilot the new sailing boat, with us on board, safely home across the open sea the summer I turned six. And that was the start of my maritime adventure. 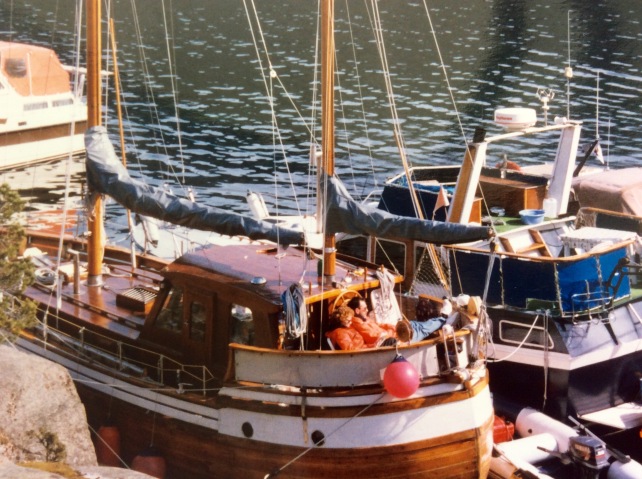 My family’s wooden Sailing both next to my Uncles’ boats.

Both of my mother’s sisters and their husbands and kids had boats of their own, not a homemade sailing boat like ours, but mass-produced fiber boats with powerful cruising engines and double back propellers. My father had baptized our sailing boat Linus, and from the day of the naming ceremony she was my best friend. I loved her fiercely and fed her bread crumbs from the prow where I usually ate my meals. I was never seasick; the waves had a calming soothing effect on me, lulling me into a dreamless sleep as though I was being rocked in a cradle. And we did meet with rather tough seas at times, so much so that my father had to provide me with a bucket to pee in because it was too dangerous to leave the cabin where I slept. I would lie, shaking with excitement in bed, squealing every time the tiny porthole next to my berth went underwater. 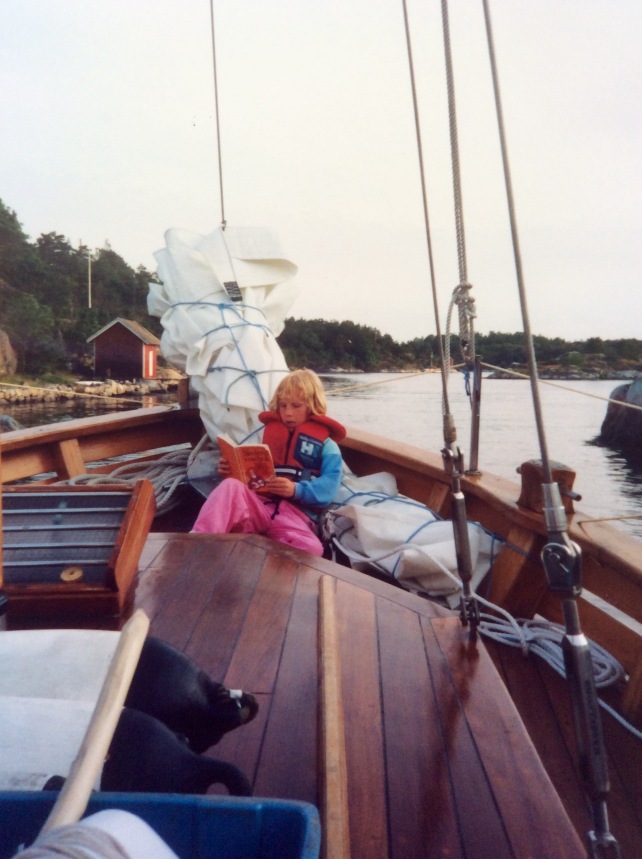 Here I am sitting in the bow of Linus, singing songs from a songbook.

We had a favorite island of course. It was called Sheep Island and had a perfect little sandy beach, a tall cliff, a forest and a huge green slanting meadow. It was a popular spot for the local sea scouts and we would tense with anticipation every time we rounded the cape of the island to see if the little stone pier was occupied or not. My brother learned to shoot on this island, with a too big rifle and empty tin cans as targets, and I found a perfectly tall flat rock to function as a puppet theater where I could hide while using my dolls to peak over the edge of the rock and enact intricate tales and dramas I made up on the spot. Oddly shaped rocks became rides in an amusement park, and smaller rounded smooth rocks were made to build rock trolls, coming to life with moss hair and store-bough craft eyes. In the evenings, my father and uncles would light a bonfire on the stones that made up the pier, and we would make stick-bread wrapped around birch branches and chocolate bananas secured in tin foil and left to burn on the logs. One time my father climbed a tall tree, made an insertion in the bark and attached an empty bottle to the wound, the tree bled into the bottle through the night and the next day we all tasted beautifully sweet sap. 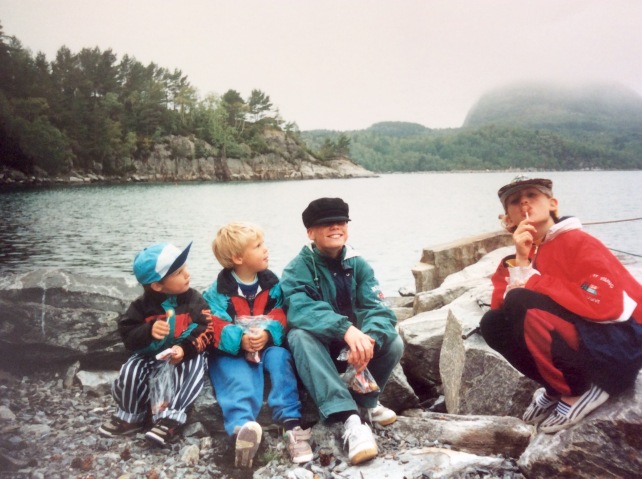 My little cousins, my big brother and I on Sheep Island. 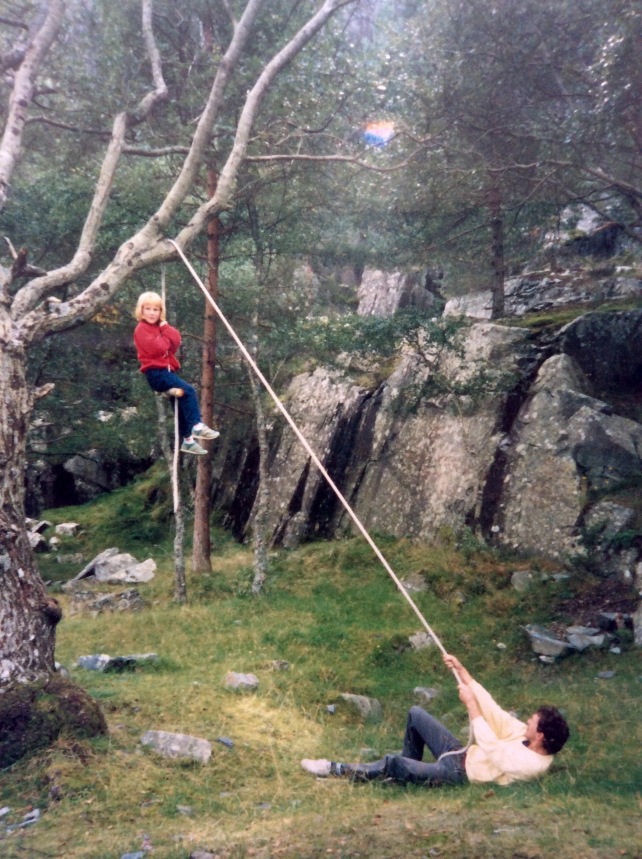 My father hoisting me up in a tree on Sheep Island (oh yes, very much at my own request!) In the background you can see the Theater Rock.

Sandy Cove was another much loved mooring spot. It too had a huge green meadow stretching all the way down to the make-shift pier, but with a dangerous scattering of goat droppings hiding underneath the tall grass. My mother arranged sharp stones for us to scrape our shoes on before boarding the boat, but alas, children will be children. The reason why we, the younger sailors that is, loved Sandy Cove so much was because it had a ghost house. A big yellow abandoned house perched on the top of a hill, surrounded by various fruit trees that never bore any fruit. My uncle and I made up a story about the old lady Olga Sandy Cove who had died in that house and who now haunted it. We convinced my younger cousins of this story, and I practically forced them to join me in exploring the underground basement of the house. The basement was a storybook image of a creepy haunted cellar. It had a damp muddy floor, racks of empty glass bottles, tin boxes with outdated faded labels, rusted garden tools and rotting discarded furniture. And it had a black cat. Of course we only found out later, after running screaming out of the cellar, desperately trying to get away from the black shadow lurking behind the shelf. I had never had so much fun in my life. 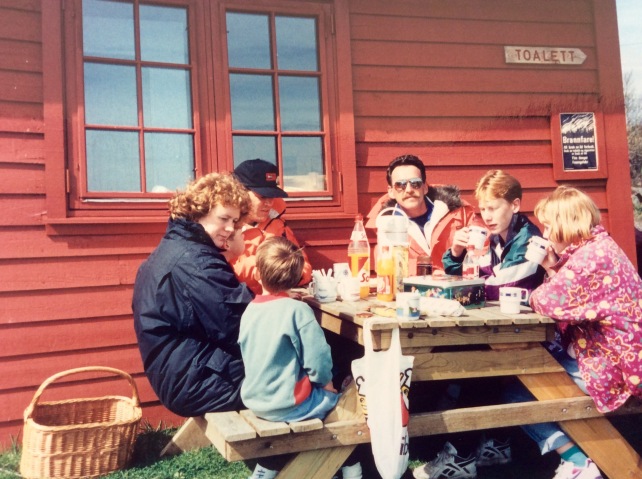 My Uncle, Aunty, Cousin, father, big brother and I having lunch on Sandy Cove by the pier.

Easter was when we peeled of the winter coat tucked around our hibernating sailing boat and set sail once again on our yearly virgin voyage to the islands. Sometimes there was still a thin layer of ice around the prow of my beloved Linus, and I would sit there, wrapped in woolen blankets listening to the ice cracking around the nose of my nautical friend, as my father captained her towards the deep blue horizon. My uncle was the most playful and fun-loving of the adults, and of course a favorite with us children, he would charge us varying amounts of candy to watch the morning telecast of BBC’s “Chronicles of Narnia” on his tiny black-and-white television, and roar with laughter when his tiny son developed the habit of emptying the little leftovers in the cast-away beer bottles into his small mouth. It was my uncle who invented all the games, like the Easter Egg Hunt. He hid a huge Easter egg filled to the brim with candy somewhere on the island, and then left clues for us to find that would eventually lead us to the treasure. We pretended to be pirates as we prowled around in my father’s rubber dinghy, named Rubber-Linus, looking for bottles with messages in them and crab traps bated with clues. When we eventually found the X marking the spot, we hoisted the Pirate Flag and hollered dirty songs, to the utter embarrassment of our poor mothers. 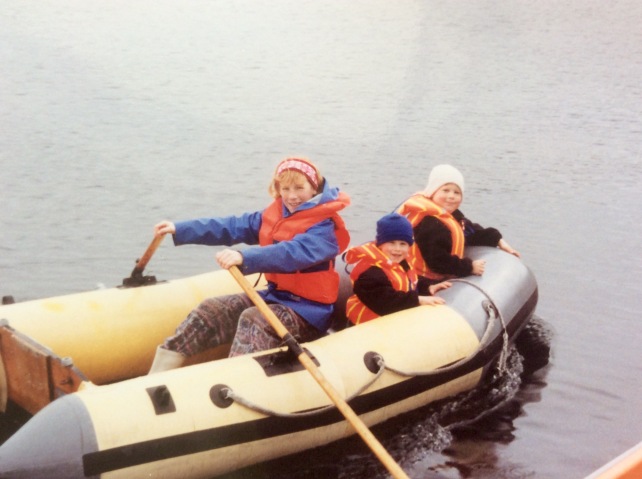 My two youngest cousins and I in Rubber-Linus.

Whale Island is where I learned to swim, after being tormented and teased for years for not being able to master the craft. I had been splashing around like a maniac, terrified of sinking to the bottom of the sea, until my smiling calm aunt took over the training wheels, and encouraged me to relax and breathe. Under her gentle guidance I learned the dreaded task in a matter of hours, even though I never grew accustomed to being under water, and kept my head always above the dark dangerous deep. Both my uncle and father were certified divers, and we children would get in the dinghy and follow the bubbles as they went into that mysterious underworld that I was always so afraid of. 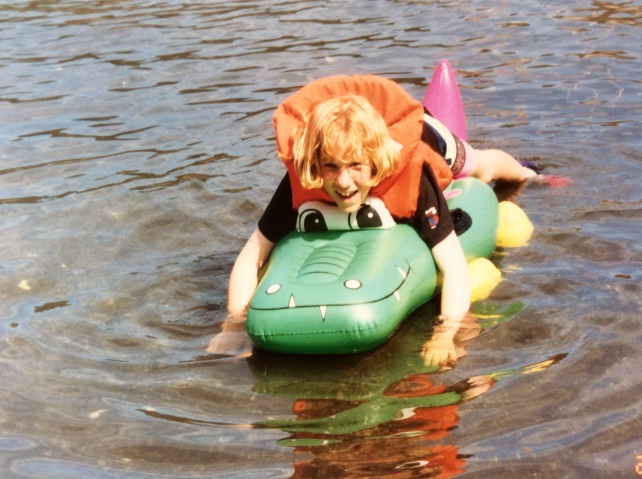 The summer I learned to swim on Whale Island.

Long Island was our Bad-Weather-haunt, a small city island only an hour away from the urban coast. This island had a proper pier standing on wooden stilts, and under that pier was the “Death Chamber”. My brother and I would go exploring this dark haunting place in Rubber-Linus, listening to the echo of the many-voiced sea crashing against the echo of our own mysteriously dark hollow voices. When the sun shone its dim light into the openings between sea and pier it blanketed the surface in phosphorescent ghostly green making the orange corals, the pink starfish and the spiky sea urchins glow like some otherworldly creatures. 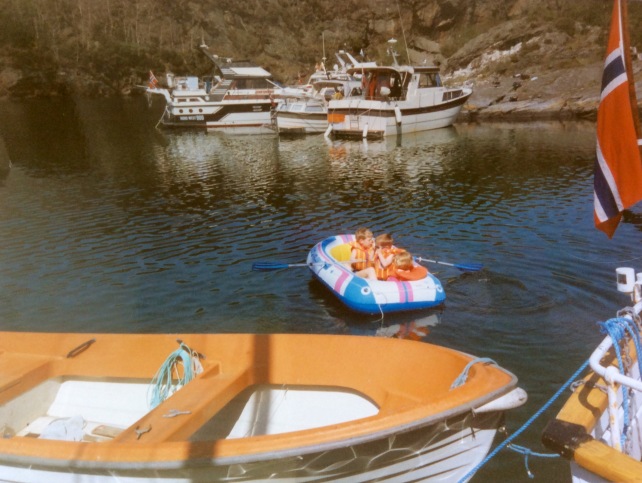 Going on an adventure!

In the summers we were granted four blessed weeks on the sea, and we could sail a little further, exploring stranger tides and foreign shores. One year we sailed all the way to Denmark where we bought ten feet of licorice and smuggled boxes of Danish beer back to Norway. Another year we went north, discovering traces of UFO’s and conch shells singing tales of the sea. But it was the South Coast we loved the best. Every year we went island hopping along this beautiful coast of blue-doored white houses, little seaside gardens, red-topped lighthouses and tiny wooden towns selling seasonal ice cream and homemade cinnamon buns fresh from the oven. In the mornings we were greeted by boys in motor boats calling out offers of newspapers and breakfast rolls, and sometimes vanilla Danish or something called “School Breads”, a yeasty pastry with cream, coconut and powdered sugar. The summer my father bought a video camera was the summer I turned movie director/actress/screenplay writer. I wrote, directed and acted in my own films, filmed and produced by my brother. We made documentaries, animated movies and motion pictures. Later on, I casted my cousins in various roles in these movies, and these projects became elaborate productions featuring trolls, detectives, murder mysteries and dance numbers. 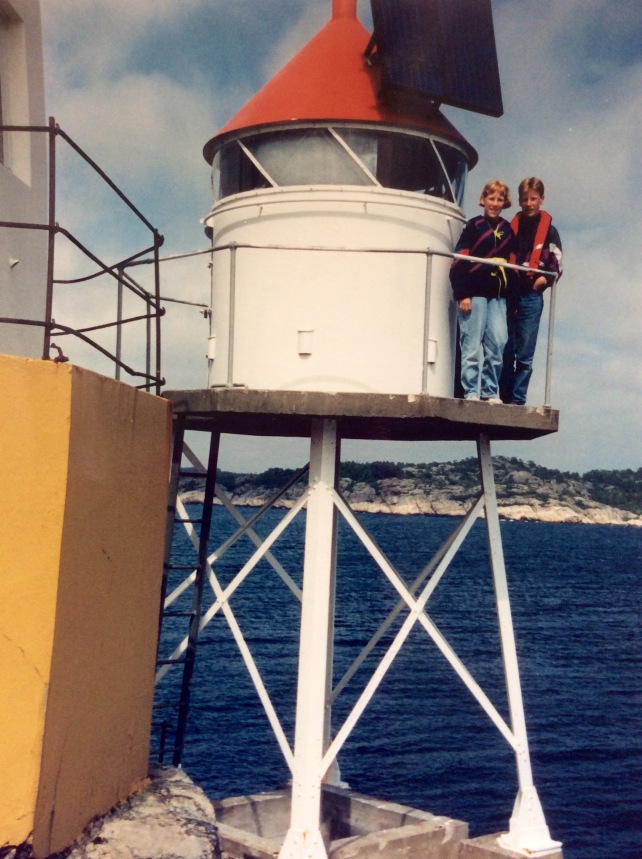 My brother and I in one of the red-topped Lighthouses.

The year I became a teenager was the beginning of the end of my adventures at sea. Boys and parties and friends replaced pirates and sails and treasures. My last summer at sea, and the last summer of Linus, I compromised with my parents and was allowed to take a friend on board. But the sea didn’t agree with her, and she fell seasick on the very first crossing, vomiting into a bucket while holding on for dear life while Linus gave her all in the fight against towering waves splashing on to the deck. We spent a few days in a little sea port, boyspotting from the mast and making up secret knocking codes to indicate the attractiveness of the boys. My friend soon grew tired of the nautical life, and we were shipped home on a train by my parents who, I’m sure, longed back to the days when I would play quietly with Barbies on the deck. Not long after that summer, Linus was sold and replaced by a much bigger sailing boat equipped to sail around the world, a long-time dream my parents fulfilled when I was a student in college. But I will always treasure my childhood at sea, and the sea, with its moodiness and mysteries, will always hold a very special place in my heart, calling out to me to it like an open-armed mother every time I miss home.