On the first day of the Easter Holidays, Cecily and I found a proper Ghost House. I, as usual, was the first to spot it. I opened the door to the potato cellar of the house boldly, and entered inside. Cecily was too scared to come, so she kept watch outside. I held my breath as I walked across the cold mud floor. I am almost ten years old, but I am braver than most kids my age. Cecily is almost eight and not brave at all. About half way into the cellar I saw something shiny on one of the many tool shelves across the wall. My heart began to pound really fast. It was a green glass ball wrapped in an old fishing net.

“Where are you?” called Cecily from the garden outside. “I’ll be there in a minute!” I yelled back. I took the glass ball under my arm and carefully walked back outside and into the daylight. “What is that?” asked Cecily when she saw the green ball under my arm. I explained to her that it was a magic crystal ball and that we were to take it back home with us.

I carried the crystal ball very carefully back to Aunty and Uncle’s summer house. When we got there uncle explained to us that the ghost house we had discovered belonged to an old lady called Olga, but she had died and now the house just stood there empty and decaying. Uncle lowered his voice so that Aunty couldn’t hear him and said that Olga had been a real witch with a broomstick and all! “I knew it!” I said to Cecily then, “I knew that the crystal ball was magic! Olga must have used it to see all kind of magical things in.” Cecily was too frightened to say anything.

I spent the whole evening staring into the crystal ball trying to see something in there, but all I saw was my own reflection. “We need the spell,” I said to Cecily. “I am sure Olga had to say a riddle of magical words to make it work. Let’s go to her house again tonight and ask her about the spell.” “No, that is very dangerous,” said Cecily. “Ghosts are no joke.” But I managed to convince her to come. I always do. “We’ll go tonight at midnight,” I said. 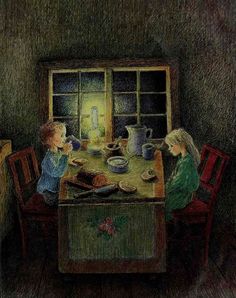 We waited until Uncle and Aunty had gone to bed before we left. It was very dark, but we had brought our flash lights with us. Cecily walked behind me, she was so scared her teeth rattled. “Stop that!” I scolded. “You will scare the ghosts away!” But that was the wrong thing to say, because it made Cecily’s teeth rattle even more.

I must admit that Olga’s house did look more scary in the dark, but I just decided not to be afraid, otherwise I would never get that spell. “Let’s try the front door this time,” I said to Cecily. The front door opened slowly with a long sigh. I pushed it firmly and went into the dark corridor. “Are you coming?” I said to Cecily, but she just shook her head. “Well, then I guess you will have to stand outside all by yourself.” I made my voice a little spooky for special effect. That did the trick. Cecily moved in behind me, but she insisted on holding my hand. I opened the door to the living room slowly and pointed my flash light into the dark room. Cecily sucked in her breath and gripped my hand tighter. “Olgaaaa!! Are you there?!” I yelled. “Olgaaaa, I have your crystal ball and I need that spell to make it work!” No one answered. We moved further into the empty living room. But all of a sudden out of nowhere, something huge with sharp claws jumped on me and screamed viciously into my ear. Both Cecily and I dropped our flash lights and ran out of the house screaming, with the big evil thing in hot pursuit. We managed to reach the corridor before the creature and I slammed the door shut behind me as soon as we were outside. The creature was locked inside the house.

Cecily was bawling and even I was shaking with the shock of it all, so we sat down on a couple of rocks to catch our breath. “What was that??” cried Cecily. I didn’t answer because I didn’t know. Then all of a sudden we heard a sound from one of the windows, like someone was tapping on the glass with sharp claws. I forced myself to look up at the window and there, to my horror, I saw two yellow eyes staring maliciously at us. I dragged Cecily to her feet and we ran in a panic all the way back to Uncle and Aunty’s summer house.

We forgot to be quiet so we woke up Uncle and Aunty. Aunty was very angry with us for sneaking out in the middle of the night. But Uncle had a funny smile on his face and he made us tell him the whole story. After hearing the story Aunty shook her head angrily and said: “It must have been that wild cat you saw. He is big and vicious and growls at anyone who dares to come close to that house. Now off to bed with you two! March!”

Uncle went with us to tuck us in, and when he put the blanked around me he said” “Your Aunty is right about the cat, but what she doesn’t know is that the cat is really old Olga transformed. You see, right before she died she put a spell on herself and transformed into a big black cat.” “Oh, I understand,” I whispered, Cecily was already sleeping, “because cats have nine lives, right?” “Precisely!” replied uncle and winked at me.

I lay awake for some time staring into the green crystal ball. I would have to get that cat to give me the spell somehow. But next time I’d come prepared. And in my dreams I was already cooking up a magic master plan.

All the beautiful art is by Ilon Wikland. See more of Ilon’s wonderful art here: http://www.ilon.se/en/about.php